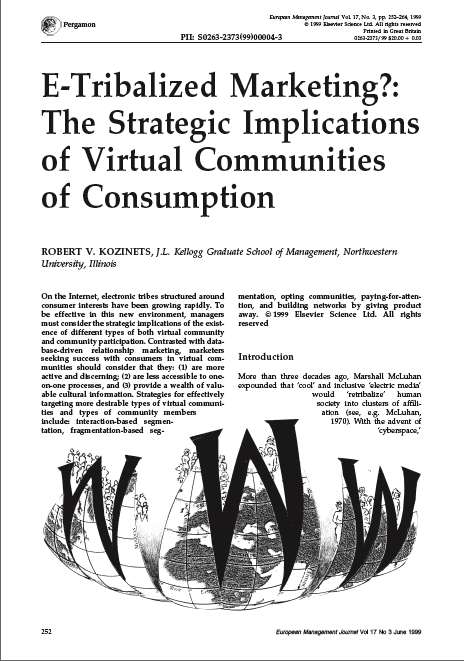 Well, for the big names in academia, 200 citations for an article might not seem like a lot, but to the little guys like me, working in areas that are pretty marginal and way off the beaten track, 200 citations seems like a pretty big deal. So it is with great pride and a smidgen of hullabaloo that today marks the day that my very first article, E-tribalized Marketing?: The Strategic Implications of Virtual Communities of Consumption, from the European Management Journal in 1999, received 200 citations on Google Scholar.

To commemorate this event, I’d like to share the article with you. I am posting the entire article in pdf for in its entirety (here: E-tribalized Marketing, EMJ 1999). Almost all major journals allow their authors to post their articles on their web-sites in pdf format with the proper accreditation (properly so, I think), and so I am following in this practice now.

Here is the full citation:

And here is the full article:

This is still my most cited work. The reason it seems to have gathered interest and these citations is probably because:

At some point, I’d really like to revisit that article, update, annotate and look at it in retrospect. I’m thinking next year, on its ten-year anniversary. I think it is important to look at the article in the light of its times.

So here is a little bit of “behind the scenes” on its “origin story.” The article followed from a 1997 article I wrote for a Financial Post series on contemporary business, a newspaper article called “How Online Communities Are Growing in Power.” That article was later republished in a book series. Here’s the citation for the book and chapter:

A little more back story on the article. The editor of EMJ, Professor Paul Stonham of the European School of Management at Oxford, had read my article in the Financial Times (I think in the book series) and liked it so much he contacted me in 1998 and asked me to expand it and write something on the topic for the European Management Journal. As a new author and a very junior academic (I had just started my job at Kellogg/Northwestern in September of 1997), I was flattered by the interest, and happy to get some of my ideas in print. Paul was really taking a chance on a complete unknown by doing this.

I thought for a second about the fact that this was not an officially “Top-tier” journal, not on the A-list of big impact journals, and that it “might not count” in my tenure decision. But then I thought–“but getting ideas out there, and real soon in this case, is what being a writer and thinker is all about.”

Thankfully, my organic intellectual instincts prevailed. And boy I’m glad they did. Writing this article was super easy. After years of studying it, I had tons to say about the topic, and the writing just flowed in no time at all. Sending it out was a joy. Paul accepted the article almost exactly as I sent it, with just a few small, helpful suggestions. What a difference from my JCR experiences, which were (with one exception) about as joyous an experience as being slowly hammered to death during a weeklong bout of marathon gum surgery.

Here is a brief taste of the article here, to whet your appetite to read it (and to keep on citing it, thank you, thank you!!!). This is the introduction section, in its entirety, with a few notes (italicized) added today by me:

Over three decades ago, Marshall McLuhan expounded that cool and inclusive electric media would retribalize human society into clusters of affiliation (see, e.g., McLuhan 1970). With the advent of cyberspace, networked computers and the proliferation of computer-mediated communications, McLuhans predictions seem to be coming true. Well, jeepers, nothing like an All-Canaidan prophetic opening. McLuhjan said it first, and he deserve the most credit for that!

Networked computers and the communications they enable are driving enormous social changes. People are retribalizing in cyberspace: they are E-tribalizing. Networked computers empower people around the world as never before to disregard the limitations of geography and time, find another and gather together in groups based on a wide range of cultural and subcultural interests and social affiliations. Because many of these affiliations are based upon consumption activities, these E-tribalized groups are of substantial import to marketing and business strategists. Marketers who rigorously understand them and the opportunities they present will be able to position themselves to benefit from fundamental changes that are occurring in the ways people decide on which products and services to consume, and how they actually consume them. Now, what’s important to remember was, back in 1997, 1998, and 1999, there was no Web 2.0. There was no terminology for this. And the trend was very far from obvious….I was definitely going out on a limb here.

By the year 2000, it is estimated that over 40 million people worldwide will participate in virtual communities of one type or another. Research has revealed that new users online activities tend to revolve around vapid surfing activities and e-mail. Yikes, that sounds like a value judgment. “Vapid”? OMG! Who am I to judge?

However, the longer an Internet user spends online, the more likely it is that they will gravitate to an online group of one sort or another. Once a consumer connects and interacts with others online, it is likely that they will become a recurrent member of one or more of these gatherings, and increasingly turn to them as a source of information and social interaction.

These gatherings have been variously termed online, virtual, or computer-mediated communities. The term virtual community, was coined by Internet pioneer Howard Rheingold (1993), who defined them as social aggregations that emerge from the net when enough people carry on. . . public discussions long enough, with sufficient human feeling, to form webs of personal relationships in cyberspace. McKinsey and Company consultants Arthur Armstrong and John Hagel (Armstrong and Hagel 1996) have termed groups of consumers united by a common interest communities of interest. Again, acknowledging two giants who pioneered thinking and writing about these issues. Rheingold in the social sphere. Armstrong and Hagel applying them to business. The contributions of these pioneers can not be overstated.

In spite of the prevalence of the term community to describe these groups, there has been considerable debate regarding its appropriateness. Online groups often never physically meet. Many participants maintain their anonymity. Many interactions are fleeting and ostensibly functional. Nevertheless, research into the diverse and full social interactions of online consumers has revealed that the online environment can indeed be used as a medium of meaningful social exchange (e.g., Clerc 1996, Rheingold 1993, Turkle 1995). That was the big debate back then. Notice how no one mentions this much anymore? Are virtual communities “Real” communities? Huh? What the heck does that mean?

The term virtual communities have usefully referred to online groups of people who either share norms of behavior or certain defining practices, who actively enforce certain moral standards, who intentionally attempt to found a community, or who simply coexist in close proximity to one another (Komito 1998). While sharing computer-oriented cyberculture and consumption-oriented cultures of consumption, a number of these groupings demonstrate more than the mere transmission of information, but the sacred ceremony that draws persons together in fellowship and commonality (Carey 1989, p. 18). Given this, the term community appears appropriate if used in its most fundamental sense as a group of people who share social interaction, social ties, and a common space (albeit a computer-mediated or virtual cyberspace in this case).

Whatever one chooses to call them, at least one thing seems assured. With fifty-one percent of Internet users using the Web daily (whoa! what else is there to do on the Net now?), and exponential global growth rates for new users, prodigious growth in the quantity, interests, and influence of virtual communities is guaranteed. That was a bolder claim then than it sounds like now!

Unlikely to replace physical encounters, or information from traditional media, online interactions are becoming an important supplement to social and consumption behavior. Consumers are adding online information gathering and social activities into an extended repertoire that also includes their face-to-face interactions. Now, that was pretty prescient. I never saw or wrote about these as separate domains, but always intermingled and intermingling….Ahnd I nevesaw online media replacing traditional media, but always as an “important supplement”…never either/or, always both/and….

Online interactions and alignments increasingly affect their behavior as citizens, as community members and as consumers. The prospect of advancing marketing thought and practice may come from an enhanced understanding of these groups of consumers.

And here’s the gist of the article…..A detailed account of the strategic implications of virtual communities will be provided herein, informed by four years of empirical and conceptual research on the online interactions of groups of consumers (Yep, I started taking my notes and doing my research in 1995). New developments in consumer behavior research and marketing will be conceptualized, focusing on the revolutionary changes wrought by online interactions. First, terms will be defined, and several different aspects of these groups will be theorized. Next, these concepts will inform a comparative analysis between the ways in which traditional relationship marketing theory has been implemented online, and the difference suggested by a newer framework based on the existence and utility of retribalized virtual communities of consumption. Strategic options will be explored and discussed. The final section overviews the practical implications of these changes for a revised online marketing strategy and suggests appropriate cyberspace locations through which to pursue it.

I hope you enjoy the article, which, if you missed it above, is available for you here: Etribalized Marketing, EMJ 1999

And the fun thing is, I’m still working on this stuff today, building and growing, changing and refining and commenting and critiquing, and so are lots of great students and academics. There are some lessons for fellow academic here, too:

Don’t agree? Good. Then post it and let’s talk about it. I’ve got tons more to say, but who knows if this is relevant to anyone….And…..

Speaking of Sizable ideas and thinking big thoughts, we had some great ones last week at Suffolk University. I’ll have more to tell you about the Consumer Culture Theory Conference in Boston last week in an upcoming post.