June 1st marked the fortieth anniversary of the release of the classic Beatles album Sgt. Peppers Lonely Hearts Club Band. As part of the media attention surrounding the occasion, Dr. Daniel Levitin, a former record producer and a professor of psychology and music at McGill University in Montreal, wrote an interesting article in the Washington Post about the universal appeal of the Beatles.

Dr. Levitins assertions about the Beatles remind me of some of the most important drawbacks of a psychological approach to understanding complex cultural phenomenon such as music, media, and games. Dr Levitin writes:

To a neuroscientist, the longevity of the Beatles can be explained by the fact that their music created subtle and rewarding schematic violations of popular musical forms, causing a symphony of neural firings from the cerebellum to the prefrontal cortex, joined by a chorus of the limbic system and an ostinato from the brainstem. To a musician, each hearing showcases nuances not heard before, details of arrangement and intricacy that reveal themselves across hundreds or thousands of performances and listenings.

In some ways, this is a very satisfying explanation. We take an intensely multifaceted thing like the Beatles lasting popularity and explain it in terms of something measurable. Levitin’s explanation even makes reference to the relationship between brain firing, a song’s appeal, and culture.

“Figuring out why some songs and not others stick in our heads, and why we can enjoy certain songs across a lifetime, is the work not just of composers but also of psychologists and neuroscientists. Every culture has its own music, every music its own set of rules. Great songs activate deep-rooted neural networks in our brains that encode the rules and syntax of our culture’s music. Through a lifetime of listening, we learn what is essentially a complex calculation of statistical probabilities (instantiated as neural firings) of what chord is likely to follow what chord and how melodies are formed.”

A song’s appeal becomes a matter of its expectancy-violating alterations in musical arrangement and the cannon-like firing off of neurons that it inspires in particular areas of peoples brains. This picture of an inner choir of cerebellum joining limbic system joining brainstem is an interesting proposition, no doubt testable in labs with PET scanners and a panoply of sophisticated biomedical devices. Of course the music has lasting appeal this explanation asserts: it is hardwired, neurally programmed, fated to have such an effect. Like a lock and key, a code cracked, like the proverbial inventor with the better mousetrap, the Beatles simply wrote the right tunes at the right time. And people’s brains responded.

But this proposition is also a classic case of what, in scientific lingo, we call reductionism.

Reductionist thinking takes a complex phenomenon, such as say the momentous shared moments that were and are the Beatles, and attempts to explain it in terms of some simpler principle, such as the fact that their music violated contemporary musical forms prevailing at the time and thus affects peoples brains.

Through a cool, familiar, and almost dismissive sleight of hand, Levitin tells us that culture is “encoded” in the brain. The brain learns and then manifest culture. The unspoken corollary is that if we understand how the brain responds, we must also be learning about and including culture. Culture, in this sense, doesn’t really matter. All that matters for this explanation is what we can study in the psych lab.

But that strike a sour note to the critical ear. No only does the psychological explanation reduce into musical time and tempo the entire popular and social fabric that the Beatles helped to weave and were at the same time woven into, but it also assumes that other music didnt achieve a similar sort of violation. The Ramones? Black Sabbath? The Bee Gees? Couldnt we say this about any of them? And culture is incredibly dynamic. If She’s Leaving Home and Getting Better’s expectancy violations were just jarring enough for my parents and grandparents then how come those then-contemporary transgressions are still relevant four decades after their initial trespass?

I really do have a lot of respect for my colleagues in psychology and at one point in my career even intended to join them in their noble quest to better understand the world between our ears. In fact, this critique isn’t directed at all psychologists by any means, only at those who explain complex cultural matters by reference to simple principles that wipe out or ignore nuance. Dr. Levitins pop theorizing illustrates how some psychologists theoretical reach can exceed their cultural grasp. Armed with a fairly limited quiver of techniques tied to theories, those psychologists (many of them currently into brain science) tread into deep cultural waters thinking that they can take down enormously complex cultural phenomenon. I don’t think the error is malicious at all, just ambitious and a bit naive. The spirit of scientific advancement depends on such ongoing criticism and rebuttal, in fact.

The assertion that we can know all sorts of things about why a song sticks in “our” collective heads (i.e., is widely successful) by virtue of relating it to psychology, neuroscience, and rules is interesting but limited when used in isolation. The “deep-rooted neural networks” activated by “A Day in the Life” over four decades since it was first released aren’t simply following some particular pattern that a population shares like they would share a particular antibody. The words and sound and tone of “I read the news today, oh boy,” are being interpreted actively in terms of their associations and the individual and collective stories and mythologies to which they connect. They are rich with meaning.

Putting psychological ideas about cultural matters into the media exposes them to the healthy scrutiny of other social scientists experienced in the exploration and explanation of cultural happenings, such as cultural studies scholars, anthropologists, and sociologists (the so-called softer sciences). These more systemically oriented thinkers tend to notice the missing wholes in the simplistic arguments that their more mechanistically-inclined fellow scholars often tender.

Explaining the lasting success of the Sgt. Peppers album without virtue of reference to the waning popularity of the band of the band, the bigger than Jesus controversy, their retirement from touring, their innovations in multitracking, concept theming, engineering, studio effects, and ambient recording technique, the incredible cover design, the controversial drug references, the lyrical inventiveness and risk-taking, and on and on seems trite and hollow. Are we to believe that, if some no-name group from Cincinnati had composed With a Little Help From My Friends before the Beatles (and perhaps even found a better singer for it), then they too would have been skyrocketed into eternal stardom by virtue of their song’s enchanting harmonies? Or was it more likely that the entire historical and cultural milieu, the richly storied tapestry surrounding the Beatles at this time also contributed to the album’s status as the single most influential album of all time? 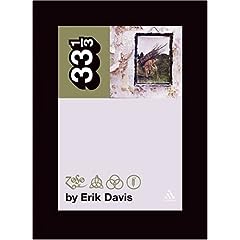 . Roving over the misty and mountainous hills and far afield of psychological musicology, Davis takes us on a different kind of magical mystery tour, one that reveals the occult sources, lusty matters and primal paradoxes that fuel Led Zeppelins lasting appeal and the power of its most famous album.

Although I strongly suggest that you have a look at the original book for its original and enchanting prose, I will offer a brief taste for the sake of contrast. Like Levitin, Davis takes on the explanation of the appeal of an enormously influential song by a momentous band. But in his discussion of the appeal of Zeps prom-classic Stairway to Heaven (perhaps the most well-known song of all time, easily kicking Yesterdays ass for my generation: X), Davis talks not only about the charismatic deployment of words and music in the tune, but also about its placement in the album and its ability to act as the culmination of an alchemical drama.

All manner of important contexts for the songs appeal are then summoned, from the idea that it deals in postmodern contrasts of acoustic light to metal heaviness to its organic and unfolding quality to the Romantic Western occultism of Jimmy Page. Davis cites religious studies scholar Mircea Eliade in connecting the idea of the stairways as a sanctified bridge signifying death and deliverance; he connects to Mithraic ladder symbols; he summons black magician Aleister Crowley’s encounter with an Angelic/daemonic being holding a pan-pipe “itself a kind of stairway’; explores Pan as “the horniest of Greek dieties” and links him to the Christian image of the devil; he notes the commercial references to money in the song and point up their amazing self-referentiality for consumer society.

Davis analyzes and connects to a web of meaning the individual references and allusions in each song, such as “the piper’s appearance in ‘Stairway to Heaven,” which, he tells us “not only indicates Zeppelin’s romantic belief in such pagan power, but their attempt–successful, one would have to say–to both unleash the spell and reflect on the musical process of enchantment itself” (p. 125).

There is much more to recommend his analysis.

My main point is to distinguish the complexity and detailed contextualization of a convincing cultural analysis (Davis) from the elegant and simple reduction of one that I find remarkably unconvincing (Levitins).

When you want to understand the reception of an intricate, complex cultural producta painting, a book, a film, a TV show, a videogame, a virtual universe, an advertisement, a brand image built on the history of decades–what sort of scholarship would you rather rely upon? The latest thing being trumpeted in marketing is so called “neuromarketing” that takes the lived experiencing of a product or an ad and distills it down to its effects on particular regions of the brain. Sound familiar? I’ll have more to say about this soon.

For now, let me say this. The Beatles appeal cant be distilled down to the transgression of musical norms. Thats a réduction de Beatles that I just cant stomach.